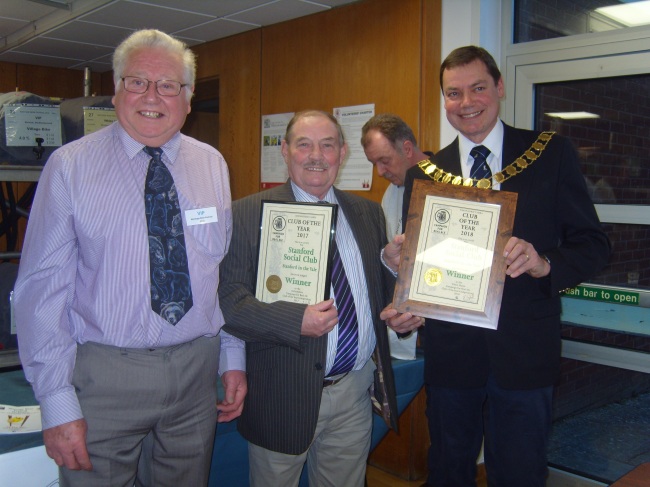 Certificate being presented to Colin Clark and Malcolm Hutt by the Mayor of Wantage (Steve Trinder).

The club, or ‘The Shed’ as it is affectionately known to members and locals alike, is situated in Sheards Lane in the village of Stanford In The Vale, near Faringdon in Oxfordshire and offers a good friendly atmosphere. We stock a wide selection of low-priced beers, wines , spirits and soft drinks.

The club is run purely on a volunteer basis and is open Monday to Friday evenings from 8pm-11pm, Saturday evenings 7.30pm-12.00 midnight and on Sunday afternoons from 12.00 lunchtime-6pm. The membership fee is £7.50 per person (senior citizens £5.00) per annum. New members are always welcome, just pop into the club and ask for a membership form. Children are also welcome but should vacate the premises by 10.00 pm.

There are facilities for playing darts, pool, dominoes and crib. The club has its own darts, pool and crib teams.

The club has Sky Sports TV viewing on a large screen TV.

Entertainment will be hosted throughout the year such as Music Entertainment Nights, Race Night, Bingo Night, barbeques during the summer and Open Mic is held regularly on the third Wednesday of the month.

Formerly known as The Working Men’s Club it was built in 1928 on donated land using volunteer labour, being run latterly by it’s Steward Fred ‘Buster’ Smith until his death in 1977, after which it was run by a group of 12 people as the Stanford Social Club.

This non-profit site has been maintained on an entirely voluntary basis since April 2016. The content has been submitted by Stanford Social Club Committee Member.